Los Angeles Soft Story Retrofit | Is My Building on a Fault Line?

Posted by Bryan Echeverria on Nov 7 2017

There are thousands of high density apartment buildings across the City of Los Angeles and surrounding neighborhoods. Unfortunately, most apartment buildings built before 1980 have a soft story design that will require some sort of earthquake retrofit. This is important because Southern California averages more than 100 earthquakes annually, according to the US Geological Survey. The City of Los Angeles passed Ordinance 183893 and Ordinance 184081 in 2015 to require all qualifying soft story buildings to be retrofitted to meet new seismic guidelines.

Soft story buildings are susceptible to structural failure during an earthquake because of their design. But if a soft story building is built on a fault line, the likelihood of collapse due to earthquake damage is greater. The California Geological Survey recently identified 4 new fault lines in the West Los Angeles area. The fault lines run along some of the most expensive real estate in Los Angeles. Including neighborhoods like Brentwood, Westwood, Culver City, Santa Monica, and Pacific Palisades. These new fault maps limit new development in the area that will be directly over the faults. Structures that are built over fault lines could completely collapse if the foundation breaks during earthquakes.

The Santa Monica fault runs directly underneath Santa Monica Boulevard. In 2003 the Los Angeles Times reported that an analysis showed that more than a dozen apartment and office building plans were approved without requiring any additional seismic studies. These areas of West Los Angeles have a dense population, with most apartments being soft story buildings. Neighborhoods affected by the Santa Monica Fault include Beverly Hills, Century City, Rancho Park, Westwood, Sawtelle, Brentwood, and Mid-City. 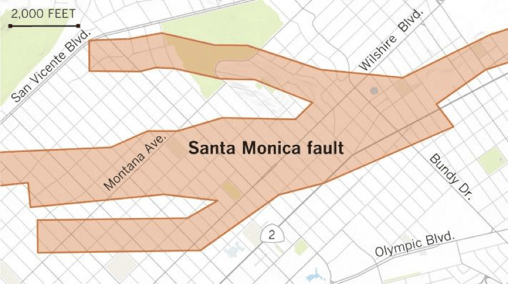 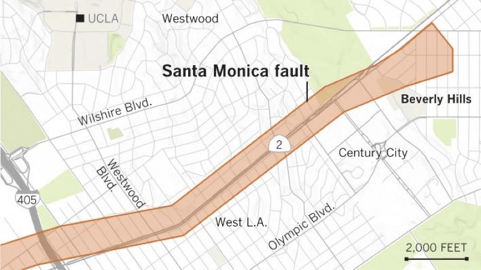 The Santa Monica fault line, which runs from Beverly Hills to Santa Monica, also extends into Pacific Palisades. Just like the City of Los Angeles, the City of Santa Monica also introduced ordinances to require seismic retrofits of soft story buildings. The new Seismic Ordinance in Santa Monica is far more extensive and has more requirements. These new standards are described as the toughest in the nation. 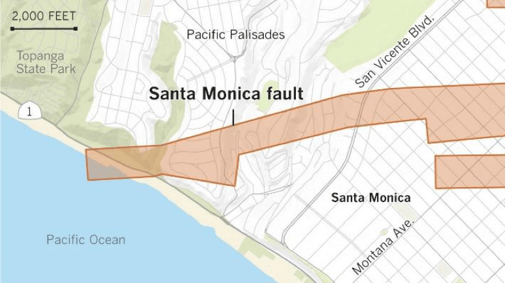 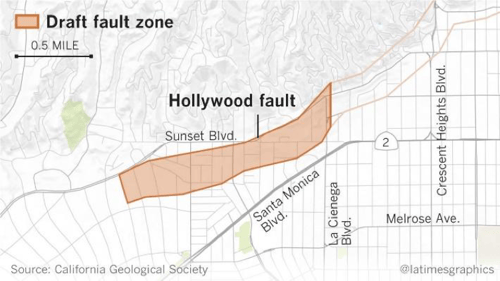 A fault zone was also identified in Hollywood, another area that has a high number of apartment buildings. The fault zone runs between Sunset Boulevard and Santa Monica Boulevard along the Hollywood Hills. Any soft story apartment buildings in these areas have a higher risk of collapse during an earthquake. The soft story design is vulnerable to collapse during violent shaking. You can find out if your building could collapse in an earthquake by reading Could My Building Collapse in an Earthquake?

Don’t wait for the Big One to damage your building. You can get the soft story retrofit process started today. Deadlines for the Los Angeles Soft Story Retrofit are quickly approaching, don’t get fined for complying. Typical construction companies will refer you to an architect to get drawings, and that can take months. Our team will draft your preliminary set of drawings within 4 weeks. You will not find this expedited service anywhere else. Our team of engineers and designers will make sure your drawings are up to code so construction can begin as quickly as possible. Our team will also represent you with Building & Safety at the city of Los Angeles and city of Santa Monica whenever necessary. Once the drawings are approved, we will provide you with a detailed written quote that covers all labor and materials for your soft story retrofit construction.

If you want to learn everything there is to know about soft-story retrofits you'll want to check out our most in-depth article What is a Soft-Story Retrofit? Everything You Need to Know About Retrofits  on our new website. There, you'll be able to access all of our retrofit blog articles, case studies, our retrofit gallery, short videos, and enjoy free access to our full-length soft-story webinars. Our team has developed all this content for property owners like you. It is your destination to learn all about the retrofit process. Bay Cities Construction and Soft-Story Retrofit Pros is here to help answer any questions you may have about your retrofit project. Our team has the experience to Engineer & Build a Cost-Effective Retrofit Solution for your property. Get started today by visiting our website at www.softstoryretrofitpros.com to schedule a free assessment.