How Much Does it Cost to Remove a Wall? 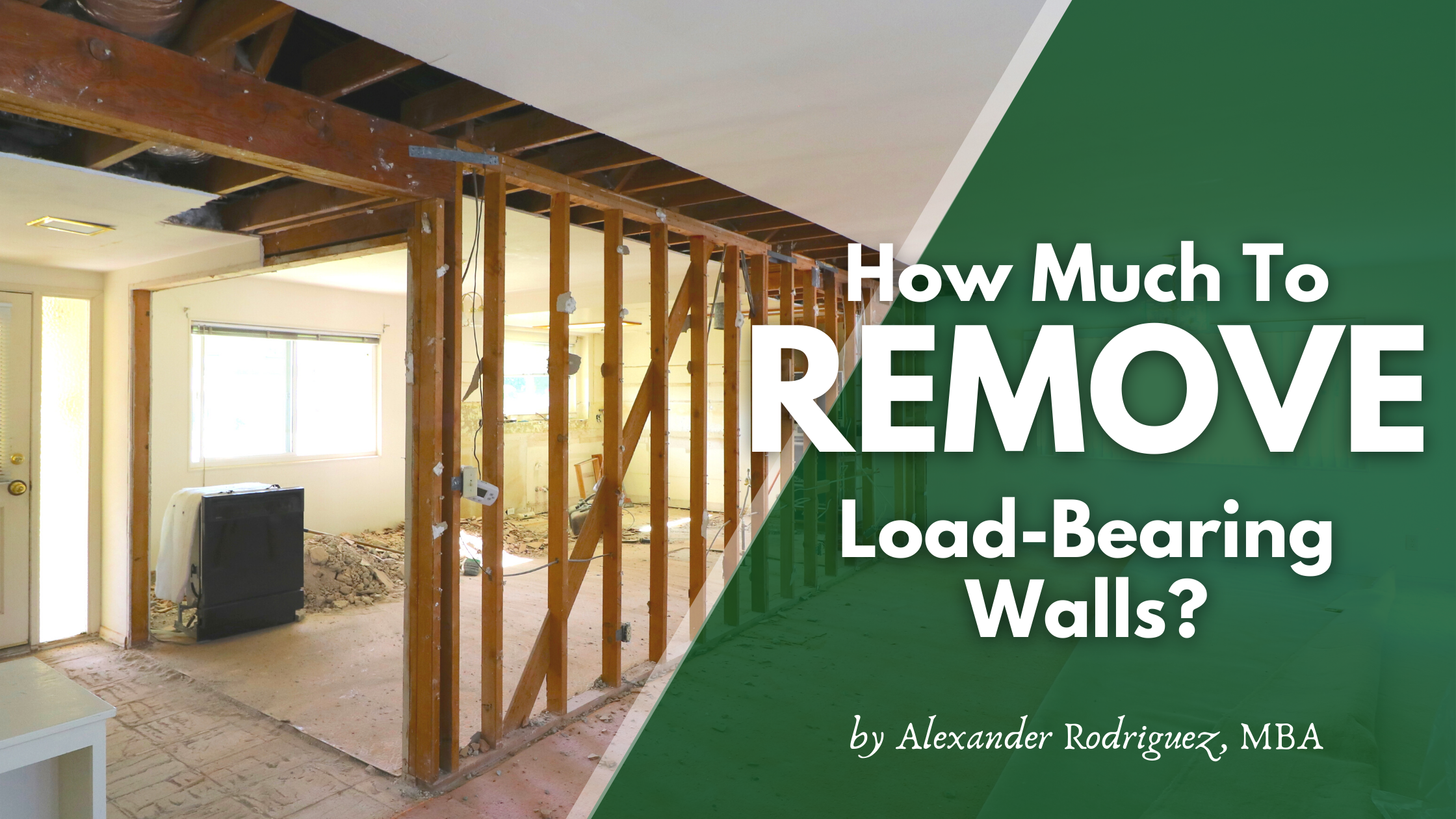 When homeowners are looking to make their kitchen bigger, removing or relocating a wall becomes part of the equation. But, is it within budget? All homeowners try to gauge how much they can renovate with the amount of money they have saved up, but sometimes the budget is too tight to get everything on the wish list.

Things to Consider When Removing a Wall

How much does it cost for structural engineering for a 2 Story house?

Average cost to tear down the non-load-bearing wall

How much does it cost to remove a load bearing wall in a 1-story home?

How much is the cost of engineering plans for the removal of a load bearing wall in a single-story house?

Removing a load-bearing wall in a 2-Story Home

How much does it cost to remove kitchen load bearing wall?

Unfortunately, online lead-generation companies like Homeadvisor, which is now owned by Angi (formerly known as Angie's List) set false expectations by posting articles online that reflect a cost of $300 to $1,000- WHAT A BARGAIN! Frankly, these cost assessments are utter nonsense. With 20 years of construction experience, I wrote this article to be transparent with you and to share the true cost of removing a wall in a kitchen. We will break down all the steps, and all of the different components you need to consider to safely and efficiently remove a load-bearing wall.

There are two main considerations with removing a load-bearing wall; gravity loads and lateral force.

The first thing you’ll need is a full set of plans. Building & Safety departments will require a full set of plans showing the existing floor plan, the walls to be removed, and the new framing members located above the now-gone wall and roof framing.

If the house is 2 stories, a full floor plan for the second floor will also be required. A structural engineer will need to calculate the weight of the new structure, the entire building, and the areas of the building that will be affected by the removal of the load-bearing wall. They will develop a structural design that allows a transfer of the gravity loads straight down to the foundation. Additionally, the structural engineer will also determine if the structure will require any lateral strengthening. 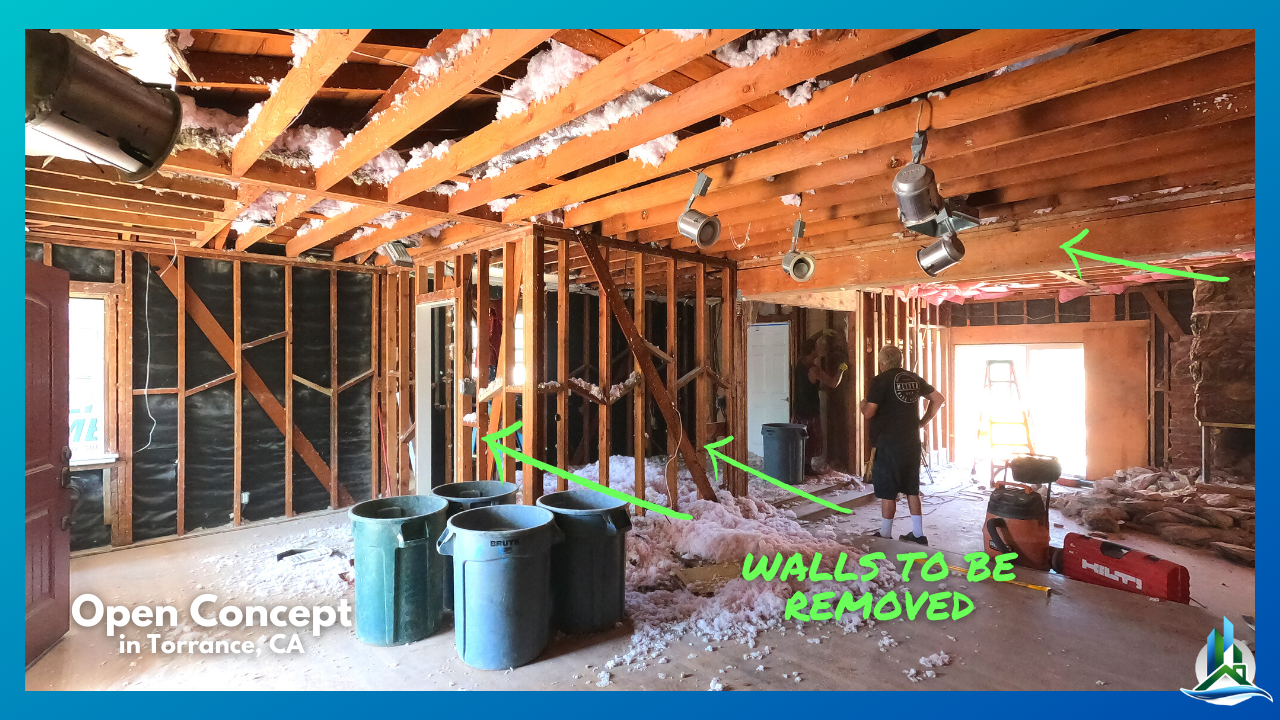 Lateral force, or Shear Force in engineering terms, should always be considered. California is ‘earthquake country’, and Los Angeles is right smack in the middle of it. Lateral shear force is what we experience during an earthquake, the back and forth ‘twisting’ motion. As a house moves during an earthquake, the lateral force causes rapid tension and compression on all members of the structure. When interior walls are removed it impacts the structural integrity of the house. Gravity forces are always a concern, as such, any load-bearing walls that are removed must be replaced with adequate members (steel or lumber) to ultimately transfer the load to the concrete foundation. Structural engineering determines the size of the beams and the location of the support members.

In this section, we will discuss the true cost of removing a wall. The construction cost incurred when removing a load-bearing wall of a house with 2-stories is typically between $25,000 to $35,000. Homeowners will also have to pay for engineering plans, and in some rare cases, a soils report. Soils engineering reports can take up to 8 weeks to get and cost around $5,000. Your construction costs will be higher if you need to relocate any electrical lines, plumbing lines, or HVAC ducts, this could cost you an additional $8,000 to$12,000. Homeowners must also consider the cost of lateral bracing of the exterior walls. An important part of protecting your home from earthquakes, this could cost you anywhere from $10,000 to $20,000. Removing walls (the right way) can be a major investment, these things play a major factor when considering the removal of a wall.

To sum it up, removing a load-bearing wall from a 2- Story house is much higher than a single story. It can cost much as $84,000 to a homeowner’s construction budget. 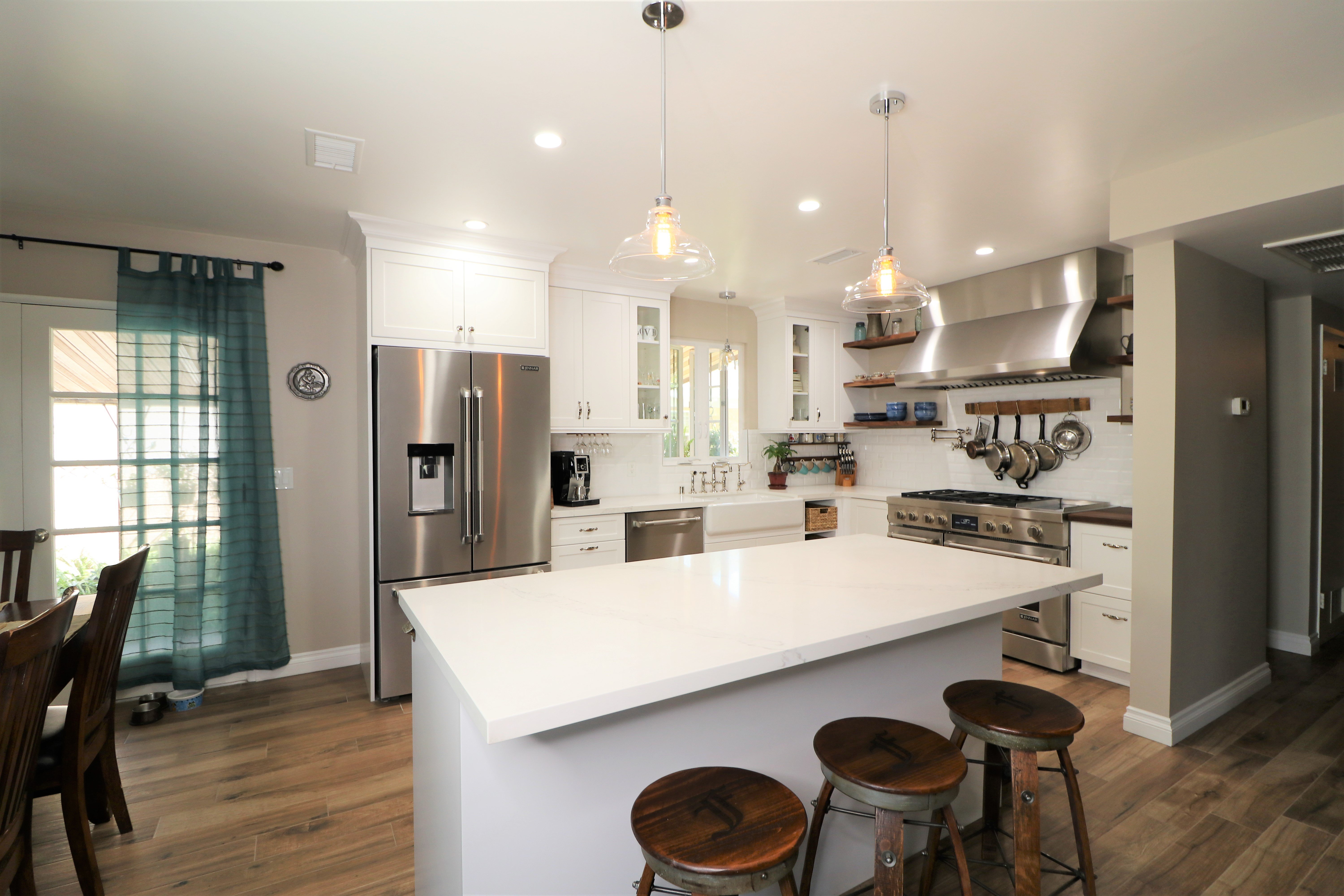 Things to Consider When Removing a Wall

Most people only consider the cost of removing the wall, but do not consider the cost of having to deal with MEP (mechanical, electrical, and plumbing) systems. In 90% of the jobs where we remove a wall, changes need to be made to the electrical and HVAC system. The drywall on the walls needs to be repaired in the affected area . As a result, these alterations can cost as much as $15,000 to $25,000.

Once the wall or walls are removed, the ceiling-light layout must be adjusted accordingly. This is a requirement in order to have a balanced look between the spaces being combined; you need to create a seamless transition where the wall once stood. In the image pictured above, we had to install new can-lights in a pattern that hides the old location of the walls that were removed. We also had to move the vent lines from the HVAC system- The system was not replaced but since the line was moved, you have to perform a HERS (Home Energy Rating) test to see if the system has any leaks that can affect its performance. 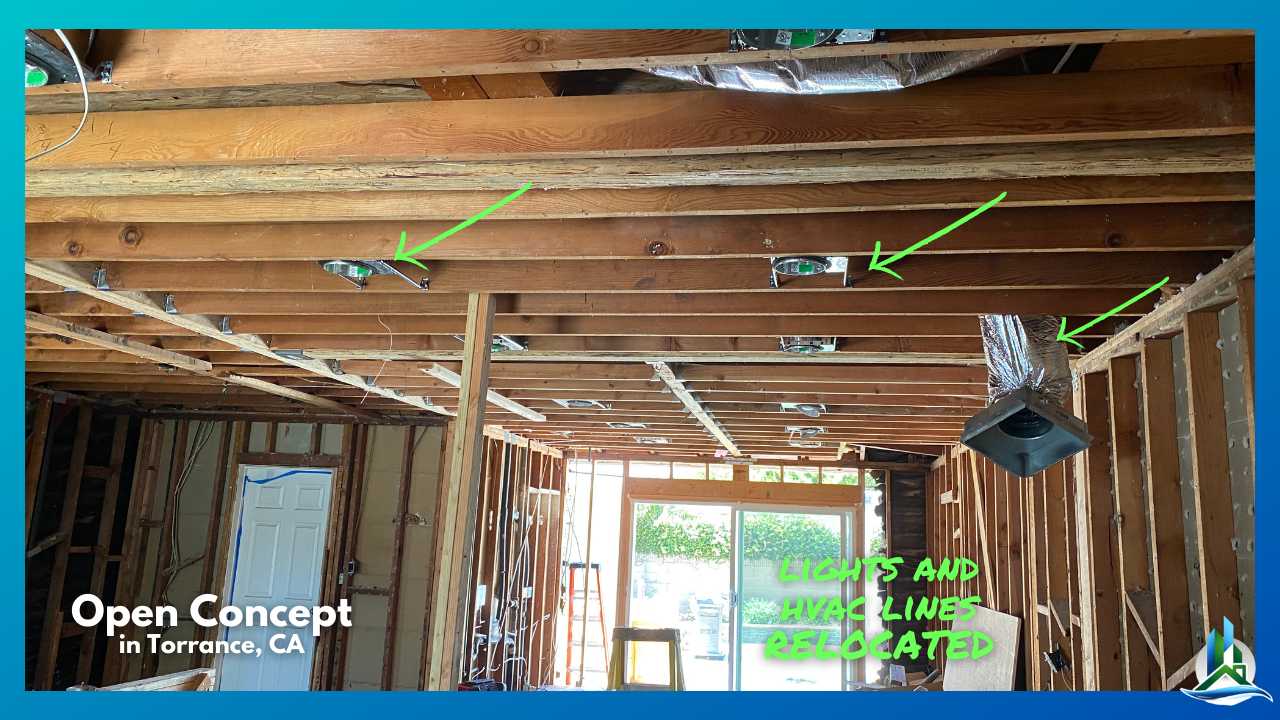 The removal of a load-bearing wall will require a temporary system to hold up the load of the structure (this is so the house doesn’t collapse, very important). This is called shoring. In most cases the engineers will design the shoring wall based on the weight of the ceiling. The cost of creating the temporary shoring will be about $2,500 to $3,800. You will also need to remove any rubbish and construction debris from your home. You can’t toss this type of trash in your trash bin, you should expect to spend around $2,500 for somebody to haul away your trash and take it to the municipal dump. 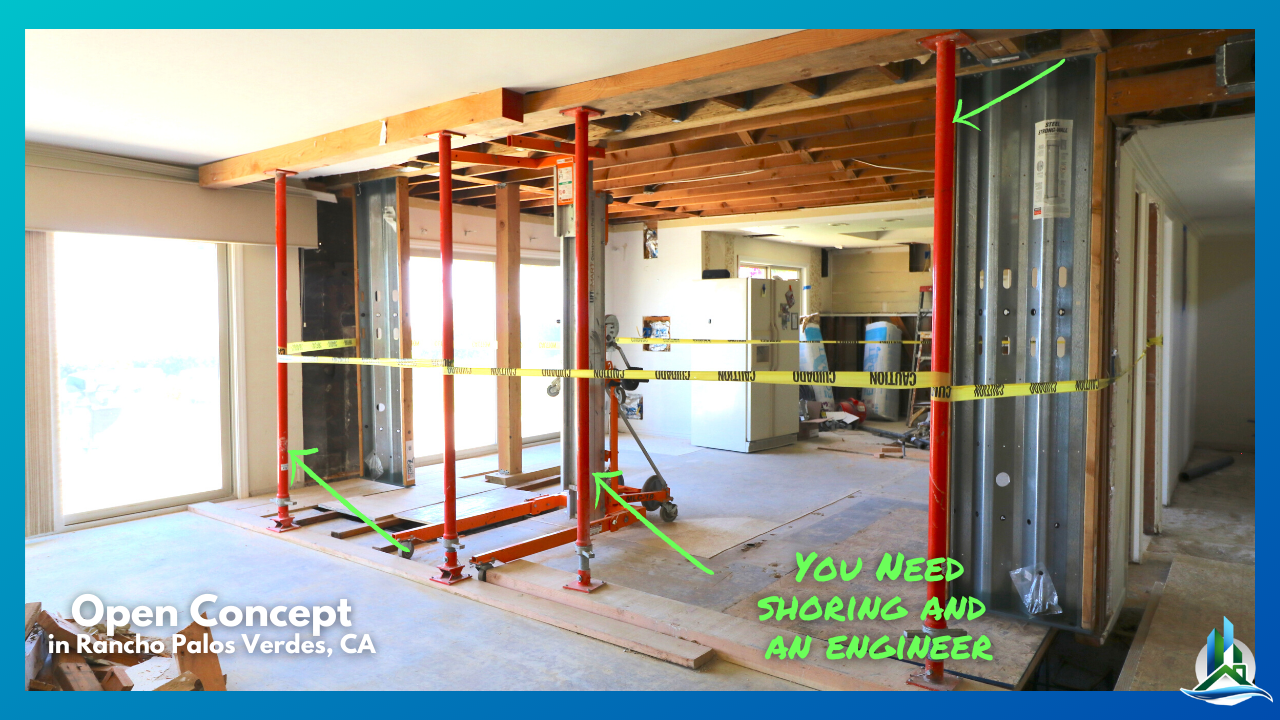 How much does it cost for structural engineering for a 2 Story house?

Removing a load-bearing wall in a two-story home is a serious project, you need to do it correctly and by the book. In order to do so, you will need a set of engineering plans. Structural engineering plans can cost anywhere between $7,000 to $12,000 depending on the complexity and size of the project. The size of the structure and the soils compositing are major determining factors of cost. Hillside sections of Torrance and Palos Verdes can expect to pay up to double the price. These historical prices are for structures between 2,500 and 3,000 square feet. 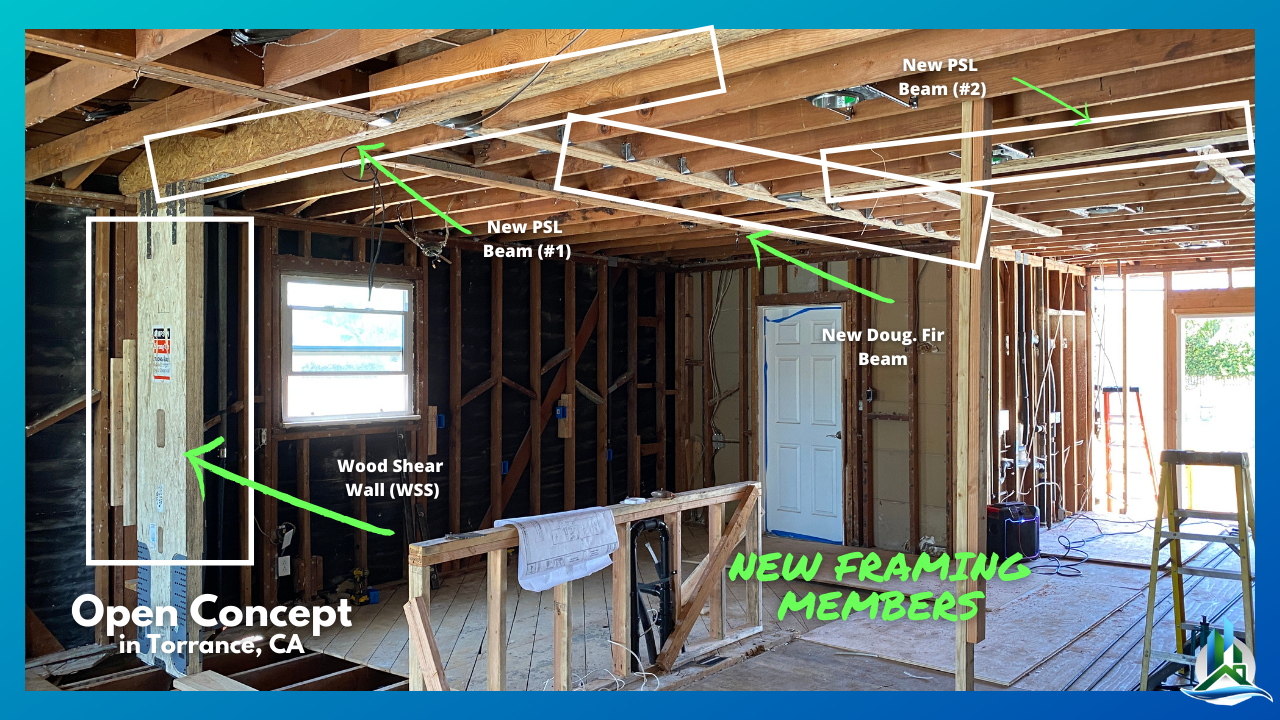 Average cost to tear down the non-load-bearing wall

If the wall to be removed is non-load-bearing, then you will not have to shore up the ceiling. The only cost you will incur is the labor to remove the wall and trash out the waste. You’ll have to repair some drywall where the wall once stood, but in most cases, the cost to remove a non-load-bearing wall is less than $4,500.

Removing interior walls is easier and cheaper than removing exterior walls. Exterior walls will always require additional shearing along the wall that is partially being removed. This means that the foundation will have to be underpinned and steel hold-downs or steel straps installed. The existing wall framing will also need to be retrofitted with Structural Plywood (APA Struc. 1 Sheathing) to create lateral resistance. Each square foot of plywood transfers approximately 200 lb-ft (foot-pounds) of lateral force. The structural engineers will calculate what the lateral force will be for the altered section of the house. This will determine the amount of plywood sheathing that must be installed in order to properly transfer the force to the foundation, and keep the building intact.

How much does it cost to remove a load bearing wall in a 1-story home?

On average, it will cost between $15,000- $22,000 to remove a load bearing wall from a single-story house in Rancho Palos Verde, CA. In this case study, this project we did in 2019, we removed two partition walls. One was between the kitchen and the other was between the living/dining area and the entrance of the house. It is a very typical floor plan in Rancho Palos Verdes, CA.  This house is 2 stories, however, the area above the wall that was removed was only a single story. In this case the wall removed was about 35 feet long and it supported the weight of the roof, but not the 2nd floor. 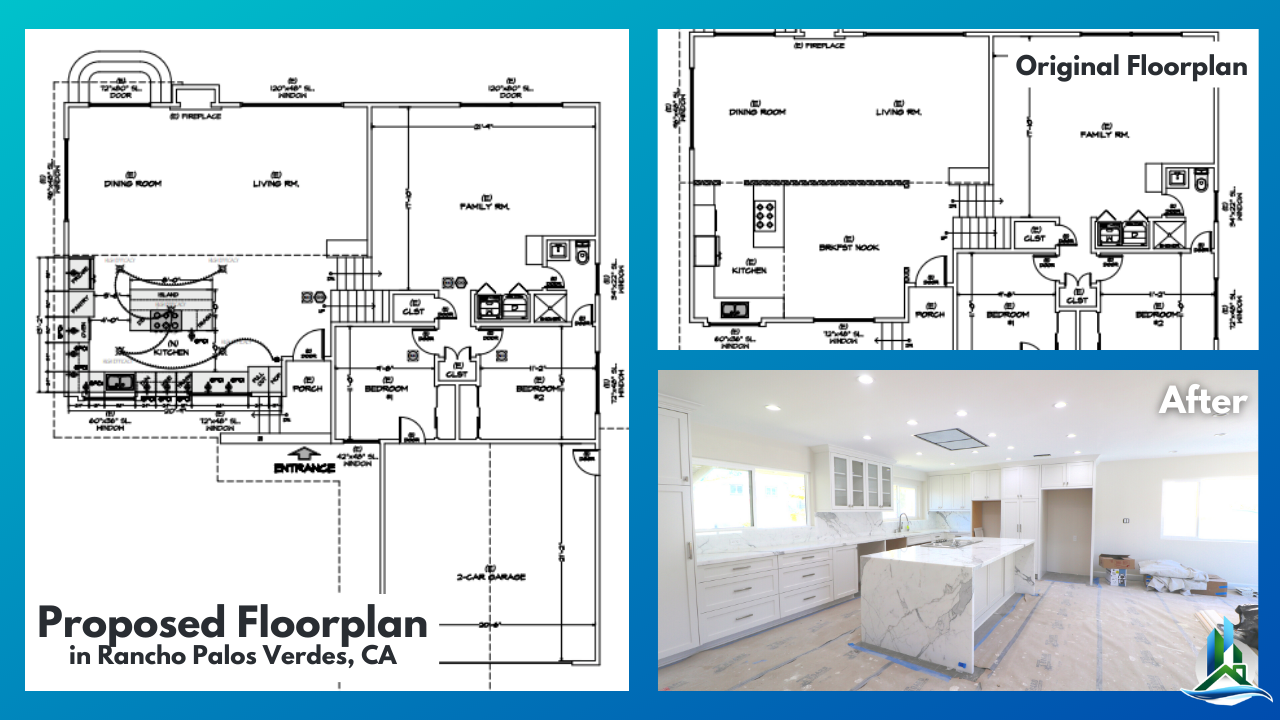 How much is the cost of engineering plans for the removal of a load bearing wall in a single-story house?

Removing a load-bearing wall in a single-story home will cost about $5,000 to $9,000 in engineering costs to draft plans for a load-bearing wall removal project. Keep in mind, that lateral force may or may not be significant at first. Once walls are removed and spans are expanded, lateral forces become a greater concern. In the plans below, you can see that the new room is significantly larger. Even though it was not required by code, we installed structural 1 plywood on the along the exterior walls to give the structure strength and enhance its performance during an earthquake. 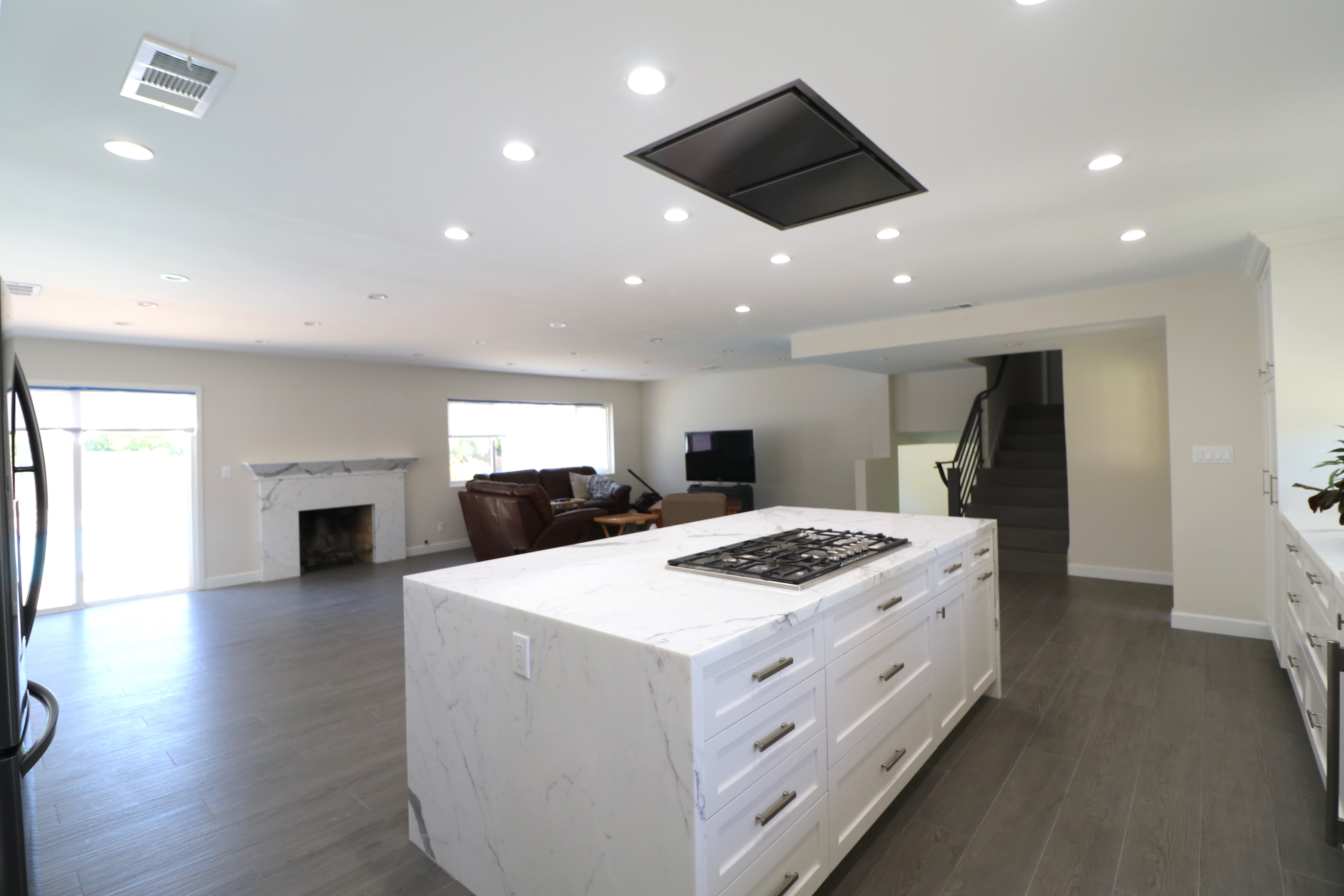 Removing a load-bearing wall in a 2-Story Home 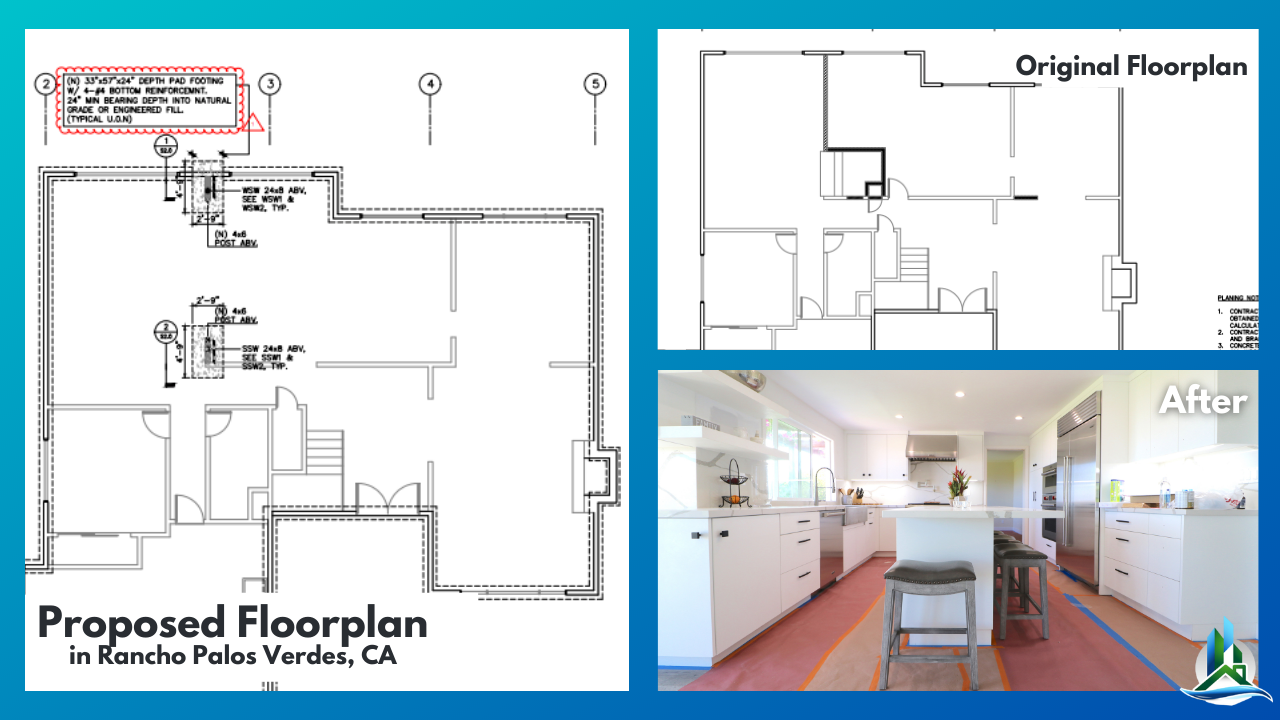 Example: The Vallon House – At this project in Rancho Palos Verdes, we removed a load-bearing wall that sat between the kitchen and the family room. The wall was removed to open the space and create a large open-concept kitchen with adjoining dining area and family room. The new space would span 42’ x 25’ creating a fun kitchen and living room floor plans. This two-story home is huge, its 3500 sq ft, with 5 bedrooms and 3 baths. Removing a central load-bearing wall was complex, the large openings can be a bit tricky to design correctly. This is certainly true with the weight of the second floor. The existing floor joists spacing did help create a workable plan.

Notice the size of the room, these new spans are long, and these big open spaces present a challenge for structural engineers. Lateral resistance is now transferred to the exterior walls. The engineering plans called for the installation of 2 Simpson Strong-Tie Steel Strong Walls (SSW) shear walls to resist lateral force. The engineer also called out for the installation of an engineered a Parallel-Strand Lumber (PSL) beam to sit above the new strong walls. The new PSL beam was installed to handle the gravity load (weight of second story), and while the steel shear walls provide the lateral load resistance required to safely withstand earthquakes. This system is commonly used in areas of the home that have moderate to heavy gravity loads.

The information in the blog article represents historical internal data from projects I worked on in 2021 within the Southern California market. It is meant to give you, the reader, a broad understanding of construction costs for the removal of load and non-load bearing walls. Construction costs have been rising, and it is hard to predict what future costs could be. If you want to learn what the construction cost will be for your project, you should consider researching how much you can get done for the budget that you have to work with. It may be that you do not have enough money to do everything you have in mind but the only way to know is to be in conversations with contractors that you trust.

If you want to learn more about kitchen & bathroom remodeling I have over 200 articles for you to learn the ins-and-outs of home remodeling in the South Bay. Here are some articles that I think you will find useful.

At Bay Cities Construction, we can provide you with guidance on how to build your project within your budget.